A gift for Canberra

On Canberra Day 2013, we celebrated Canberra's 100th birthday!  It was intended that Phoebe's story would be a gift to Canberra for such a special occasion.

Book making takes quite some time.  Once the decision was made to publish the book, it took nearly a year to be print ready! Without the talents, direction and support of Ian Coate it never would have all come together. 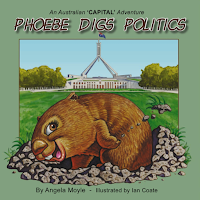 The book is a story about a wombat who digs into Parliament House Canberra and has an encounter with some politicians and the media before being rescued by a trusty ACT Parks & Wildlife Ranger.

On the 12 December 2013 at the official book launch held at Kingford Smith School in Holt, 100 books were donated to the ACT Government.  They were distributed to schools and libraries around Canberra.

The books are available for sale at different locations around Canberra - at Dymocks Belconnen, Harry Hartog Woden, The Botanical Gardens Bookshop, The National Library of Australia and to my great delight the book about a wombat who has an adventure at Parliament House is now for sale at The Parliament House Giftshop!

It is also available to buy online through Vivid Publishing or through my online shop.

The following clip is a cute, one minute long book preview that will give you a sneak peak at the beautiful illustrations that are in the book.

Teaching resources relevant to the book that align with the Australian Curriculum are now available here.  There are some questions and facts about Canberra, wombats and Parliament and three worksheets for children F-2.